Holistic Grooming: What’s It All About?

January 3, 2017 by Editor-in-Chief in Education 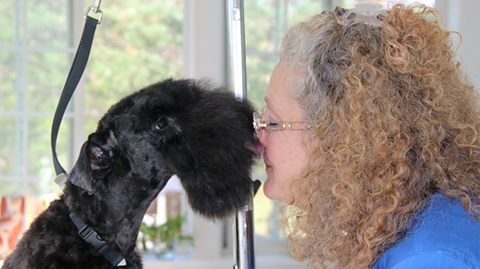 One of my grooming customers is a veterinarian. She asked me, “So, what’s the deal with holistic pet grooming?” The word holistic has been rather overused in recent years. It smacks of woo-woo new ageism and touchy feel good-ism. She looked skeptical just saying it. I replied, “It is taking the entire pet into consideration when we groom it. From choosing the best possible products and providing a safe and comfortable environment, to making sure that the not only the physical but also the psychological and emotional needs of the animal are supported during the grooming process.”

She tilted her head and looked at me quizzically. “Isn’t that sort of a no brainer?” A fair question! It should be obvious to groomers that the animals they are working with are living, sentient beings whose feelings should be taken into consideration when they are undergoing the grooming process.
Unfortunately, this is not always the case. In most situations, it is not because of a lack of caring on the part of the groomer; more so a lack of education or understanding that options are available.

Here is an example. Yesterday we groomed a small mixed breed which had bitten several people during previous grooming attempts. I was warned repeatedly by the owner to be sure to use a muzzle. I do keep muzzles on hand, but rarely use them. When the dog came in I could immediately see that he was very anxious. Any biting on his part was from fear, not outright aggression.

Taking this into consideration, our approach was to move slowly and gently, ignoring him when he thrashed about and acted as if we were trying to kill him, and praising him when he was still for a moment to catch his breath. Within just a few moments he caught on, and the times we could praise him became more and more frequent. Although he was terribly matted, we were able to groom him from bath to bandana in 70 minutes without resorting to using a muzzle.

When his delighted owner picked him up she asked how we had managed to get him completely groomed. We explained our method and she said, “Oh, the other groomer tried to hold him really tightly and he hated that. It made him worse.”

This example shows that the previous groomer knew one method of trying to subdue dogs that struggled for grooming. It I probably how she was taught. Even though the dog in question is not very large, he IS very strong, and determined. Trying to muscle him ended badly for everyone concerned. The groomer was bitten, the dog went home unfinished, matted and upset from the process. The owner despaired of finding another solution, and waited so long to try again that the dogs coat was a matted mess by the time we got to him.
Working to calm his fears and de-escalate his behavior cost us nothing, and gained us a new customer. It is not that we are any more skilled than the previous groomers, but that we worked with the dog’s personality to achieve a successful outcome. In the end, it’s important to remember that working holistically isn’t just about the pet, it is taking everything into consideration; the animal, the client and the groomer. No one thing trumps something else. Every aspect is important, and decisions are based on what is best for all three.

“Integrative grooming,” might be a better and more descriptive term to describe this method. This means to bring parts together to create a whole. It sometimes means thinking in different and creative ways to overcome a challenge.

Here is another example. As a professional groomer, I have worked almost every Saturday of the last 32 years. To be honest, I’m tired of it. I’d like to have Saturdays off to spend with my husband. Last year I took a good hard look at my customer list. There are only a handful of customers which absolutely must have Saturday appointments. All of them need grooming about every 6 weeks. With a little juggling, I could get them all on the same rotation.

Now I work one Saturday every six weeks. It works for my customers, the pets and me. I am much happier with this schedule, and my happiness makes me a better groomer.

Putting all the woo-woo and touchy-feely stuff aside, grooming holistically merely means considering the well-being of the pet, the owner and even the groomer. Integrative grooming is more than giving a good haircut, it is thinking of the dog or cat as a complex, sensitive, living creature and treating it with the respect and kindness that will support its mental, psychological and physical well-being.

A good groom is expected from all of us, but a great groom leaves the pet feeling as good as it looks, the owner feeling satisfied, and the groomer happy to work another day.

Member of the pet grooming industry since 1961, Webmaster of PetGroomer.com and creator of Grooming Business in a Box.